Yes, Brazil nuts are from Brazil, but they also grow in all regions of the upper Amazon in places where mature rainforests can still be found. They hang from trees, but not individually like walnuts. They are clustered together like sections of an orange, inside a hard shell that looks and feels like a cannonball. I couldn’t help but incorporate this fascinating nut into my novel, for both the ecology of the tree and the way the nuts are harvested are truly astounding.

There are only two creatures that can open one of these cannonballs or “cocos” –the agouti (a native rodent) and humans. The agouti gnaws through the hard shell with sharp incisors, whereas humans hack into them with machetes.

You can’t find a nut more organic than the castaña. People have tried to grow them in plantations, but with minimal success. The yellow petals of the castaña flower are curved tightly inward, protecting the nectar and pollen. Only a group of native bees can tease their way through these petals, and because these bees only live in dense rainforests, that is where Brazil nuts grow.

Instead of bringing the Brazil nut into domestication, we have to go into the wild and meet this nut on its own turf. But first, we need to wait until the cannonballs fall from the trees. A falling, 2-pound coco can be deadly.

I learned to harvest Brazil nuts from Sofía Rubio and her family, who have a small business of harvesting and selling Brazil nut products under the name Shiwi http://canopybridge.com/members/shiwi-2/Listings/ . Once a year, Shiwi offers an educational experience to interested citizens who want to learn the entire process of harvesting, drying, and cracking the nuts: http://www.conservamospornaturaleza.org/noticia/conoce-la-ruta-de-la-castana-junto-a-shiwi/. 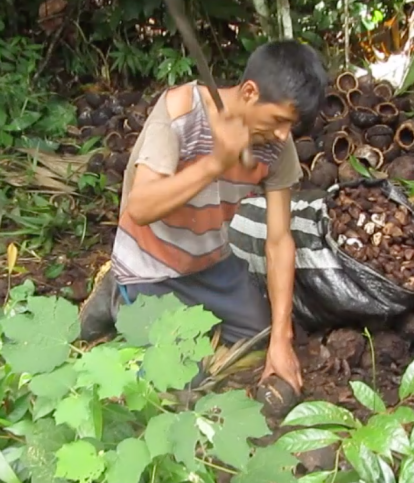 In March of 2016, I was the only international participant in the Shiwi educational experience. Along with twelve Peruvians, I traveled by small skiff down the Tambopata River for three hours to a section of the Tambopata National Reserve where the Rubio family leases the right to harvest nuts from the Peruvian government. Our living situation was primitive, but the rewards were many, from being awakened by howler monkeys in the morning, to hearing ghost stories around the campfire at night. During the day, I shouldered a large basket made of jungle vines and searched under the Brazil nut trees for the cocos. I learned to pick up the cocos with a three-pronged stick called a pallana. I also got to try my hand at whacking the cocos open with a machete. I managed to retain all of my fingers in the process!

Here is a description of harvesting castañas from my novel, Shadows in the Selva:

Michelle plunged the four prongs of the stick around the coco, swung it over her shoulder and tapped it on the basket rim, but it wouldn’t break loose. She tapped twice more before she felt it drop into the basket.

“Don’t push the coco too far into the pallana,” Julián advised. “Just enough to pick it up. That way, it will fall out easier.”

Michelle nodded and looked for another coco. She wedged the second one too firmly again, afraid that a loose grip would cause the two-pound ball to drop onto her head mid-swing. She finally got the hang of it on the third try.

“Hermosa!” Julián said. “You’ve got it. You can head over that way, and when your basket gets too heavy, just dump them in a pile over there.” He pointed to a cleared area with a scattering of coco shells from the previous year.

Michelle struck out, eager to help with the harvest. After a short time, she got into a rhythm: walk, jab, swing, tap. Walk, jab, swing, tap. Her basket grew heavy—forty pounds she guessed—so she waddled over to the drop-off site. Tipping her body sideways, the cocos tumbled over her right shoulder like a bunch of cannon balls.

When Michelle returned to the pile with her second load of cocos, Julián was seated on the ground waiting for her, a coco between his legs.

“Now for step two,” he said. “Time to open these cocos.” He whacked the hard ball with his machete, twice on one side, twice on another, and the coco split in two. He set down the machete and pulled the two halves apart, revealing the treasure inside. Michelle stared in awe at the tight cluster of Brazil nuts, their hard, ribbed shells nestled one against the other like sections of an orange.

“Amazing!” Michelle said, her eyes wide. Julián laughed and poured the nuts into a large, woven plastic bag, eighteen nuts in all. He scooped up another coco, placed it between his legs, and hacked again. Michelle watched the way he moved his left hand away each time the machete descended. Still, it looked like dangerous work.

“Now it’s your turn,” he said, looking up at her, his dimple flashing. She gasped.

“Are you serious, Julián? I’ve never used a machete before.”

“Never too late to start,” he said. “This machete is shorter than the ones we use on the trail. Here, sit down and I’ll show you.”